“Do you want salt on the rim?” she said.

I jumped. She shouted it across the bar at me just as Joaquin Phoenix saw the green man in Signs. Then there was a man standing next to John Goodman putting bullets in teenagers in Red State. The gunshots were so loud they could have been real. At that point, I didn’t know that those were the names of the films. I had only just realised I had walked in to the Lebowski Bar‘s Thursday night film quiz. I did want salt on the rim. 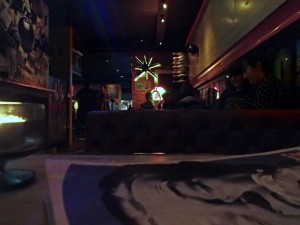 Bowling at 90 degrees in the Lebowski Bar, Reykjavik.

The drink menu was filled with milk-based cocktails, the bar’s hat tipped to The Dude‘s booze of choice; the White Russian. Ruth wanted to go off menu, so I ordered her a margarita, and picked for myself a caprahinia from the smattering of non-milk cocktails on the menu. The caprahinia was A grade, but Ruth described the margarita as “a martini with tequila and cointreau, no lemon, no syrup”. Not a margarita at all then, but still good in Ruth’s opinion.

“But I think if you had a few it might burn a hole in your throat,” she said.

The film quiz continued at its incredible volume. Entry was free, but we decided to let the quiz unfold for us as entertainment and shirked the urge to find a competitive element in the evening.

On the next round we decided to embrace the chaos and order White Russians. The result made me question what I had been doing with my life so far. It wasn’t milk, it was cream. And dude, it was amazing. So amazing that I ordered a second as the answers to the film quiz were delivered and the pixie hair cut friends of the quiz master retreated to the back room to dance to Otis Redding and Cliff Richard.

The cream overdose spilled us out onto Laugavegur, where we hunted down a taxi driver who spends some time as a chef. He bemoaned the current digging up of Reykjavik Roads, but got us back to the hotel for under 2,000 ISK and admitted to “like talking”, so it seemed we were all winners that evening.