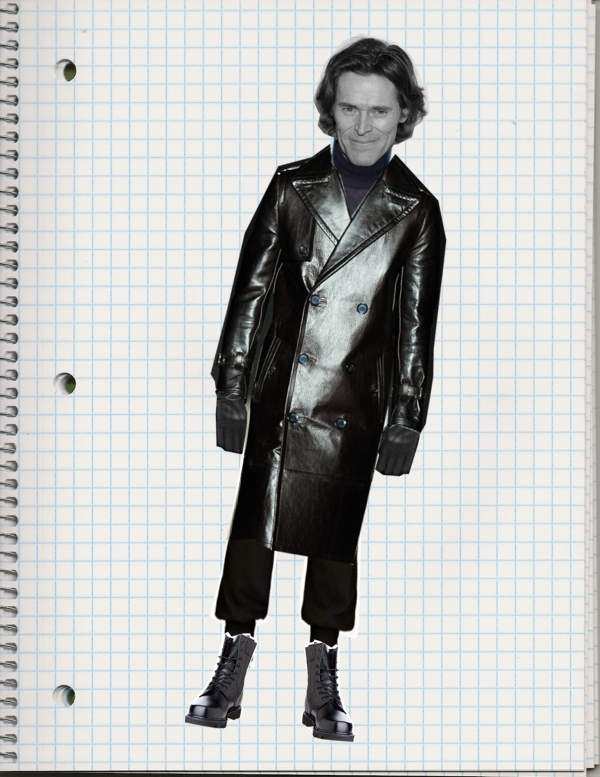 I had the honour of watching the film with one Peter Raben, who I count as one of three fans of the Look the Film series in the world (the second being me, and third being a stranger I have to convince myself is looking on). So taking the honourable Mr Raben as my inspiration, Look the Film is back, bringing you the JP Jopling style from The Grand Budapest Hotel.

I’ve decided to take a more catwalk approach to LTF from here on in, so we start with a Daks leather jacket, as reported from Milan Fashion Week 2013 on The Fashionisto (can’t find a listed priced on this number, but I’d plump for a clean £1,000 at a guess). The knee length cut brings out a suitably bad-guys-in-WWII look for what has to be Anderson’s most menacing character to date. The slow chase scene between Willem Defoe’s JP Jopling and Jeff Goldblum was a highlight for me in The Grand Budapest Hotel – funny, but Jopling’s dark wardrobe and underbite fangs gave it a suitable creepiness.

On the sorry excuse for trousers I have used, take your pick from the following:

As a result I have plumped for some Rick Owens DRKSHDW Men’s Black Prisoner Drawstring Trousers, £252.00 at Oki-Ni. They have a suitably short look, and while not being quite smart enough, they would give an extra layer of warmth when the elasticated cuffs (are they still called cuffs when they are all the way down there?) are stuffed into your jackboots.

Speaking of which, Ali Express offered up these Retro Combat Boots, which was probably exactly what wardrobe asked for when prepping for the film ($48.15 – £28.99). Now, as retail websites go Ali Express looks a little down market (who am I to scoff, I’ve referenced products from Surplus & Outdoors in the past) but here’s what I realised – The Grand Budapest Hotel is most definitely a winter film and we are creeping slowly towards summer, so I’m taking what I can get.

I stole a polo neck from the Versace Autumn/Winter 14-15 catwalk rundown via GQ (see image 22 – glancing on Amazon I would hazard a guess at this setting you back around £141.75) and finished up with gloves from Merola gloves found on Mr Porter (£135).

Check out my JP Jopling Pinterest board to marvel at just how short those trousers really were.

The Artist, Oscar favourite, is about to be swept away in the language of glamour, winning and heartwarmingness.

The Artist, Oscar anyone?

But let’s take a moment to reflect on how cool its mute protagonist looked even when he was down on his luck.

As George Valentin (Jean Dujardin) slid from silent movie star into forgotten hero he managed to pull off a look of suave dejectedness.

And you, pleb, at home or on the bus, wherever you are reading this, can achieve it too.

Destined for an Oscar this year?

No, you’re not, so get ready to be glimpsed in your practised, dark broody face by getting your hands on a tailored cotton two-button suit blazer (£129, Banana Republic). It’s the defining feature of this look, largely unstructured, casual. For the full effect only do up the top button, dump your hands in the pockets and stalk around looking serious. Actually, for the full effect spend about a week sleeping in it and expose it to burning celluloid fumes.

You suave bastard, you might also want to pick up a Autograph Pure Cotton Slim Fit Stripe Shirt (£29.50, M&S) in blue mix (remember, only the film is in black and white, not the whole world). Keep a couple of buttons undone to show your innate manliness hasn’t deserted you in desperate times. Keep the whole thing casual with some Bottega Veneta Straight-Leg Corduroy Trousers (£385, Mr Porter) and Ask the Missus Nagoya2 brown leather shoes (£69.99, Office).

And chin up, things may still improve. The future of The Artist, Oscar nominee, is certainly looking pretty bright.

If we’re talking TinTin and fashion, there’s no point in paying attention to the recent film. The effort to modernize the look has stripped a lot of the charm of Hergé’s originals so Look the Film returned to the source material, and quickly found out that it’s impossible to find a decent pair of plus fours on the high street.

Luckily, the fashion god created golf clothing stores, which is where we find the Corduroy Men’s Plus Four Golf Trousers Chocolate (£47.50, Sport a la Mode) with free Free Long Socks. Yes! Free Long Socks! FREE! That’s one less item of clothing I have to look up.

Ahhhh, TinTin. How do you define his look? Part boy detective, part Nazi Youth member. Either way, there’s never a lot of attention given to his footwear. The PosteGiacomo lace tan leather shoes (£99.99, office) are fitting, didn’t take me long to find and don’t cost the earth – so they’ll do. He’s a kid, so apparently I’m not allowed to put him in a Marks and Spencer shirt (although that’s probably his price range, seeing as he never pockets any of the spoils himself, the dull, do-gooding little tyke). Instead he’s gone for a younger look with a Brushed Cotton Shirt (£50, Cos) and black Eythorne Tie (£45, Aubin and Wills).

One of his defining aesthetics is a flash of cardigan colour, often in a baby blue but sometime like this yellow Polo Ralph Lauren Cashmere V-Neck Cardigan (£405, Ralph Lauren).

Not that anyone will appreciate it (as he seems to spend most of his time with a drunken sailor) but he layers on top of this with a Kitsuné Two Button Corduroy Jacket (£575, mrporter), and finishes the look in the same store with a Holborn Trench Coat (£155, mrporter).

Is there a chance that just because Look the Film prescribes wearing jimjam bottoms when getting about, so you can get a costume like The Dude from The Big Lebowski, you will do it? Yes there’s a chance. A slim chance.

It’s not that mooching through the Sunday morning coffee circuit in your pyjama bottoms because of a Cohen Brothers film is ridiculous. God no. It’s that it’s already coming. It has already been decided that it is coming.

Read that back. The people who make these decisions think that WE WILL BE WEARING PYJAMAS IN THE STREET. Unironically too, as witnessed in the Topman Design spring/summer 2012 catwalks, matching all-over pattern PJs with blazers and sockless loafers. By the time winter recedes next year you will never have to get changed again. That’s enough of the mock outrage. Clearly I can’t wait.

The relatively cheap nature of these Autograph Pure Cotton Stripe Woven Pyjama Bottoms (£19.50, M&S) with their vertical stripes set the tone for Jeff Bridge’s defining character. Rumour has it The Dude’s outfit was largely provided by Bridge’s own wardrobe, but you can bet his signature cardigan didn’t come in at the price you would need to shell out for the Polo Ralph Lauren Beacon Plaid Overshirt (£220.00, ASOS). At least you can drop the brand name next time you are in the executive boxes at the rugby. In your pyjama bottoms.

A basic Tri-Blend Short Sleeve Deep V-Neck in Tri-Cranberry (£22.00, American Apparel) will complete the look up top, and it will come as no surprise to subscribers to Look the Film that The Dude’s shoes already have billions of pixels worth of blog posts dedicated to them. Strangely, considering The Dude’s lazy/zen type character, they are Otomix Taekwondo Shoes (£11.77, Otomix). Discontinued, at the time of writing this pair come from the States, and are only available in a men’s size 4… so good luck with that. These Adidas Martial Arts Shoes (£36.92, MartialArtsMart) will pass as substitutes, but they also come from the States (where I can only imagine the market for shoes dedicated to beating people up is a little bigger than it is here) so whatever postage I have put below here is not accurate, but rather a poorly researched guess.